Uttar Pradesh gangster Vikas Dubey, accused of killing eight policemen last week, was arrested from a temple in Madhya Pradesh after a nearly week-long chase involving the police across three states. Vikas Dubey was caught in Ujjain around the same timetwo of his aides were killedin separate encounters in UP. His closest aide, Aman Dubey, was killed yesterday.

CCTV footage showed Vikas Dubey, in a mask, being taken away by half a dozen cops.

Vikas Dubey was spotted at Mahakal temple around 8 am, according to the police. He was buying prayer offerings to take inside the temple when the shopkeeper recognized him and reportedly alerted security guards. When he emerged from the temple, the guards questioned him.

He first produced a fake ID card of a much younger man. When prodded further, he hit out at the guards, who dragged him to the police station.

“MainVikas Dubeyhoon, Kanpurwala,” he shouted out, when he was beaten while being taken to the police van. 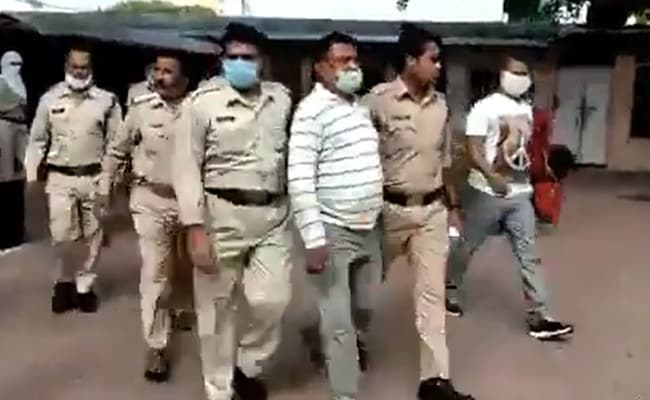 “It is a big success for the police, Vikas Dubey is a cruel killer. The entire Madhya Pradesh police force was on alert. He has been arrested from Ujjain Mahakal temple. We have informed Uttar Pradesh Police,” said Narottam Mishra, Madhya Pradesh Minister.

Eight policemen were killed on Friday when they went in a large team to Bikru village in Chaubeypur area of Kanpur to arrest Vikas Dubey.

Dubey – charged in 60 criminal cases including murder, kidnapping, extortion and rioting – had allegedly been alerted to the raid by local policemen and had set up an ambush. When the policemen reached the village, Dubey and his men, armed with AK-47s, fired from rooftops.

The notorious gangster escaped after the massacre. A massive hunt was launched and the bounty on him was raised to Rs 5 lakh.

The police inspector in charge of the police station near Dubey’s village was arrested yesterday over allegations that he tipped off the gangster and regularly helped him escape the law.

The police stepped up their search outside UP when Dubey was seen at a hotel in Faridabad near Delhi on Wednesday morning.

While the gangster escaped just before the police reached the hotel, pol

‘Come and work with me’: Mother Teresa told Priyanka after Rajiv’s...

Lockdown in Tamil Nadu extended till 30 Sept, but with most...