However, the Reds have no interest inVasco da Gama’sBrazilian forward Talles Magno, despite reports in Brazil linking the 18-year-old with a move to Anfield.(Standard)

Borussia Dortmund’shead of football operations, Sebastian Kehl, has reiterated that 20-year-old England forward Jadon Sancho will definitely be staying at the club despite interest fromManchester United.(MEN)

Atletico Madrid’s27-year-old Slovenia goalkeeper Jan Oblak is to make a decision on his future amid interest fromChelsea.(AS)

Arsenalwill announce the signing of Brazil international Willian, 32, on three-year deal this weekend after the forward’s deal at Chelsea expired.(Telegraph – subscription required)

Unitedwill demand £20m fromRomafor 30-year-old England centre-back Chris Smalling, who is willing to take a pay cut to join the Serie A side.(Sun)

The Blues lead Premier League rivalsArsenalin the race to signReal Madrid’s23-year-old Spanish left-back Sergio Reguilon, due to being in next season’s Champions League.(AS – in Spanish)

The agent of Brazil international Philippe Coutinho, 28, believes theBarcelonamidfielder could remain at the Nou Camp despite being linked with a Premier League move.(TalkSport) 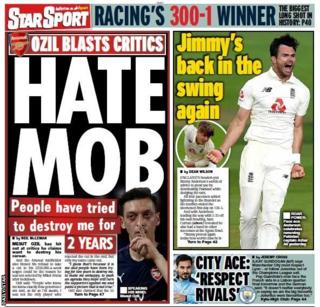 ‘Three shot’ in third night of unrest in US city