New Delhi:The Congress party on Tuesday hit out at the Narendra Modi government after Iran dropped India from the Chabahar rail project. Congress spokesperson Abhishek Manu Singhvi wrote on Twitter that the development was a big loss for India while taking a dig at the Modi government by saying, “But you can’t ask questions!”

Here’s what Singhvi tweeted: “India dropped from Chahbar Port deal. This is the diplomacy of the Modi Govt that won laurels even without getting the work done, China worked quietly but gave them a better deal. Big loss for India. But you can’t ask questions! (sic)”

Singhvi also tagged a report byThe Hinduin his tweet which said that Tehran had decided to go ahead with the construction of the rail line following alleged delays from the Indian government with regard to funding.

The Indian government had inked a deal with Iran four years ago to build a rail line from Chabahar port to Zahedan, along the Iran-Afghanistan border. 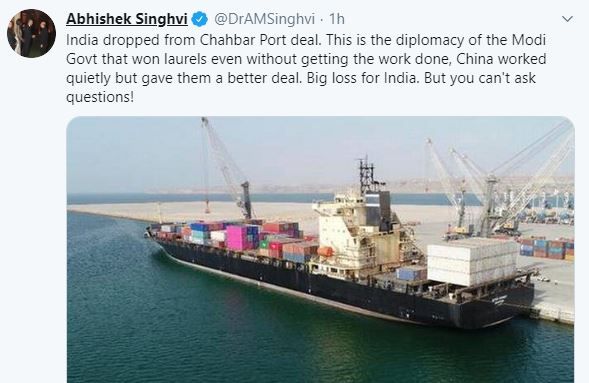 Giving its reasons for going ahead with the project on its own, the Iranian government reportedly said there had been delay on the part of India to start the construction of the project.

The track-laying process for the 628 kilometre long rail line was launched by Iran’s Transport and Urban Development Minister Mohammad Eslami last week. The rail line will ultimately be extended to Zaranj in Afghanistan.

The Iranian officials told the newspaper that the rail project is expected to be finished by March 2022. Iran’s Railways has started the construction work and for funds, it will tap into approximatel

How one man’s death reverberated around the world

“Unacceptable Behaviour” By China, Says US On Ladakh Clashes

Spain’s ex-king Juan Carlos confirmed to be in UAE

Appointed Chief “May Not Even Have 1% Support”: Ghulam Nabi Azad’s...