Last year we spotted that AMD was in the market to hire a new lead product manager for a ‘workstation division’. This was a categorically different position to the lead PM for high-end desktop, and so we speculated what this actually means. Today, AMD is announcing its first set of workstation products, under the Ryzen Threadripper Pro branding. However, it should be noted that these processors will only be available as part of pre-built systems, and no corresponding consumer motherboards will be made available.

The product stack from AMD has included Ryzen Pro and Ryzen Mobile Pro hardware for a couple of generations – these processors offer ECC-enabled variants along with corporate support on security, manageability, and operating system image consistency. Most of us had assumed that while Ryzen had a Ryzen Pro variant, the most natural variant to Threadripper was AMD’s EPYC processor line of server processors. The server market and the high-end-desktop/workstation market have always sort of overlapped, and up to this point if a user was interested in a workstation-like design, with ECC and software validation, they would look to EPYC.

Today AMD is changing that dynamic with Ryzen Threadripper Pro.

Where Ryzen Threadripper Pro differs is in the core count/frequency/TDP configurations.

There is also a small difference in DRAM support – TR Pro supports up to 2 TB, but EPYC supports 4 TB. All of the Ryzen Threadripper Pro processors are single socket only.

AMD says that its core count and frequency configurations are designed to suit a variety of different licensing models, for software that has licenses per core (where the high frequency models are recommended) or per socket (where more cores are recommended).

One of the interesting elements of TR Pro is that it is set to be an OEM only product. This means that interested parties will have to talk to Lenovo or others in order to obtain the hardware. As it stands, Lenovo is set to be the launch partner for the TR Pro family, where it will be offered as part of its ThinkStation P620 family. Lenovo will offer its P620 in all different flavors, with up to 1 TB of DRAM and dual RTX 8000 GPUs (or four RTX 4000 GPUs). 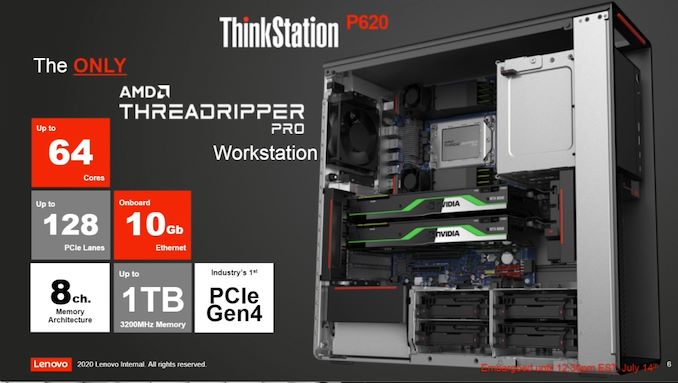 Lenovo’s P620 use the socket in a rotated orientation to aid with airflow, but this also limits the socket to only one DIMM per channel, hence why we have the 1 TB max memory support. The system will use a lot of Lenovo’s ThinkStation innovations, such as removable fans and drives and such. 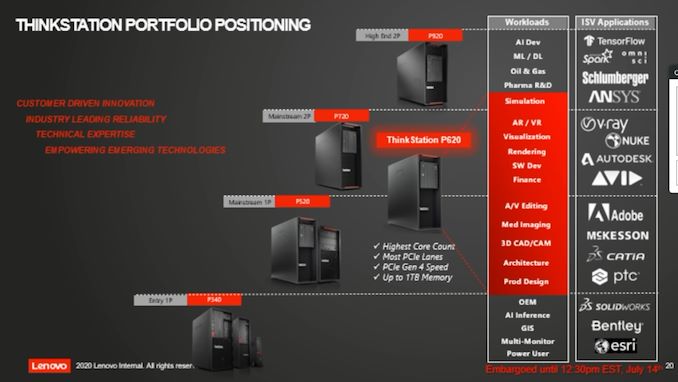 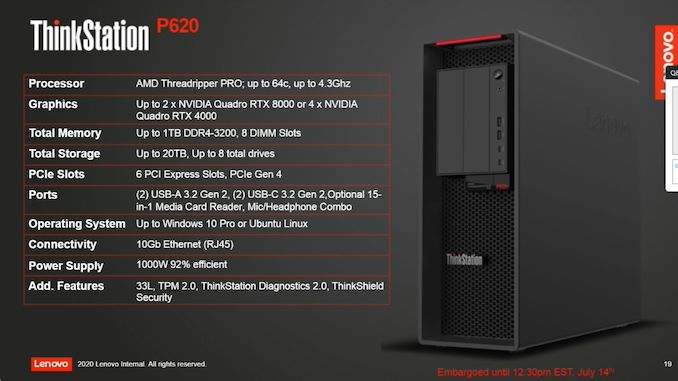 The ThinkStation P620 will be available to consumers from late September.

At this time none of the other OEM workstation providers have commented on their offerings, however by the end of the year I can imagine a few other offerings in the market aimed at different verticals.

Technically this system uses a WRX80 motherboard. You may remember an article I published early this year in January, stating thatTRX80, WRX80, and Intel LGA1159 doesn’t exist. In that article I spoke to the traditional consumer motherboard manufacturers, as well as one OEM, none of whom had TRX80 or WRX80 on their roadmaps, and with AMD partnering exclusively with Lenovo for this product line, we can see why – the traditional consumer/HEDT motherboard manufacturers weren’t part of that collaboration. No WRX80 motherboards are set to be sold at retail, and the CPUs will not be sold at retail either.

We asked AMD about this, given that Ryzen Threadripper Pro is being positioned against Intel’s Xeon W-3200 and Xeon W-2200 series of processors. Some of these processors are available in a boxed form, and others are sold as tray

Indian Air Force with Rafale has plan to take the fight...

Violence in Bengaluru over social media post on Prophet Muhammad

Terror-Exporting Nations Try To Paint Themselves As Victims: S Jaishankar

No question hour in monsoon session of Parliament